In this part, you'll write fruitful functions that return strings.

Two things that are useful in this task:

In Python, to get a new line in a string, use \n. Here are two examples shown in Thonny's shell:

random.choice is a fruitful function that returns a randomly chosen item from the given options. Here are some examples, again shown in Thonny's shell.

Note that random.choice requires an import statement at the top of your file: 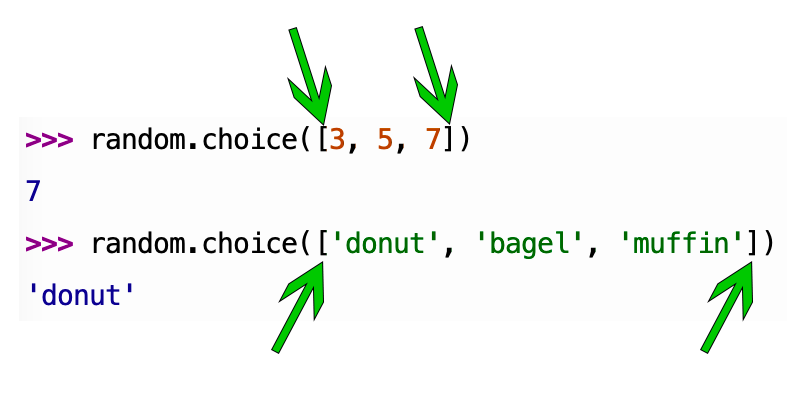 Open lab03/poems.py and find the firstLine function. Note that it is fruitful (meaning it returns a value) and that is uses random.choice.

With just two noun choices (me and them), calling the poem function returns this poem (note the newline characters tucked in there):

If you print the value that poem returns, you might see this (your results will vary due to the randomness involved):

TASK 2A. Write a function called thirdLine that will return a string with 5 syllables. For this function, write at least 3 different 5 syllable lines. Save them in variables called line1, line2 and line3. For example, you might have:

Then, in your thirdLine function, use random.choice to choose one of the three lines like this:

Make sure that your thirdLine function returns a five-syllable string.

TASK 2B. Update your poem function to call thirdLine by replacing the last call to firstLine with a call to thirdLine.

Python tip:Look at the poem function. Do you see those slashes in the return statement? What are those for?

Your poems might look something like this (again, yours will be different due to the randomness involved):

TASK 3A. Write a function called secondLine that will return a string with 7 syllables. This is for the middle line of your haikus. Here is how to generate your 7 syllable string:

TASK 3B. Update your poem function to call secondLine by replacing the middle call to firstLine with a call to secondLine. Your poems might look something like this (again, yours will be different due to the randomness involved):

Now you have your own haiku generator!

Write a fruitful function called haikuFlurry that will return a string containing 3 haikus. Below is one example (yours will be different; you know why).